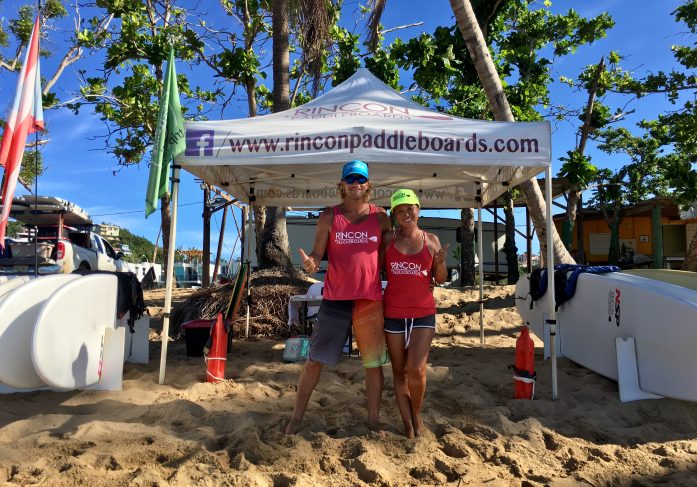 The damage done to Rincon by Hurricane Maria was very severe. However, there is one simple truth: you can’t stop the awesome! After a lot of hard work to stabilize Rincon and get everything accessible again, everyone could focus getting Rincon ready for the coming season. Much of the economy in Rincon and Puerto Rico in general depends heavily on Tourism. People from all over the world love escaping to this beautiful island to enjoy a unique tranquility and peaceful ambiance, as well as take advantage of the natural thrills out in the ocean. Rincon really is an awesome place and no Hurricane can rob it of its beauty for long. After removal of fallen trees and debris, and then more trees and debris, and then a few more trees and debris several Rincon businesses could start rebuilding again. Rincon Paddleboards was left with a fairly daunting challenge – the beach was gone. For a business setup and run from the shoreline of the beach, you can see how this would be a large obstacle. However, if you know Damanio and Chikako (owners of Rincon Paddleboards) then you understand that this wasn’t going to stop them. With enough hard work and ingenuity just about anything is possible. 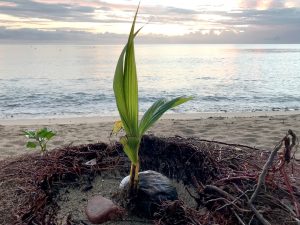 They rebuilt the beach. Literally, they put the sand back up by the shoreline, the nearby coastal areas, replanted and replaced trees that had fallen, reinforced the barren rootballs of surviving trees that somehow still stood upright, and took advantage of the piles of dirt/mud left from nearby river flooding in the field of the premises and replaced what Maria washed away near the ocean. This was a lot of work and it all started with shovels and wheel barrows until heavy machinery became available again. After a lot of hard work, soon the island started to grow back stronger and continued to naturally add to the beach. New tides, currents, and swells would help add sand and leave it sticking to the new chunk of beach at Rincon Paddleboards. The reefs are still alive and the fish continue to thrive in the marine reserve of Tres Palmas. In many areas nature has sprouted back so heavily that it’s hard to tell anything ever happened! Basically, Rincon Paddleboards is back and ready for business! Come on down, give our economy a much needed boost, and have the time of your life enjoying their SUP Tours, Night tours, and Surf Lessons. Rincon Paddleboards is ready for you!